The WrestleRealm - Live at WrestleMania XXVIII 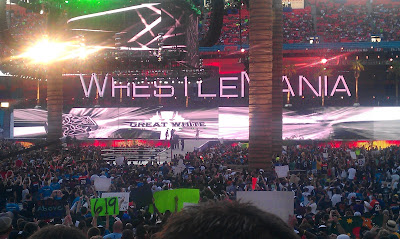 Believe it or not, The WrestleRealm was live on site in Miami, Florida for WrestleMania XXVIII.  After brief stops at WWE Axxess, the Hall of Fame ceremony, and WrestleReunion, we arrived at the "Showcase of the Immortals" and it did not disappoint.

WrestleMania opened with a solid tag team match between the upstart Usos Tyson Kidd and Justin Gabriel, and the WWE Tag Team Champions Primo and Epico.  In a very quick match, the Usos and Kidd and Gabriel came up short and and the cousins Colon retained their titles.

Notes:  Daniel Bryan was VERY over with the crowd the entire WrestleMania weekend.  At all of the WWE events as well as around Miami, wrestling fans chanted "YES" in conjunction.  After the defeat, many fans complained that the finish was terrible due to the abrupt ending.  I would like to argue the fact that this finish will do nothing to hurt Bryan and will actually rally more people behind him as he chases Sheamus for the World Heavyweight Championship.  The World Heavyweight Championship will also benefit Sheamus as he is one of the most popular babyfaces in the WWE and continues to rise to the top of the company.

Although this may have been viewed as a "filler" match by most fans, Kane and Orton put on a more entertaining match than expected by many in attendance.  After some standard back and forth action, Orton went to set up Kane for an RKO off the top rope but his attempt was thwarted when Kane instead choke slammed him from the top for the three count.

Notes:  Many fans were still very angry about the quick championship match to open the card and chanted "YES" in spurts during the first part of the match.  To their credit, Kane and Orton did get some of the crowd back and many were surprised when the choke slam from the top rope occurred.

Notes:  Although it wasn't as heated as Daniel Bryan's defeat, some fans in attendance weren't happy about the championship changing hands as Cody Rhodes has been on a huge roll for several months as the champion.  This can be argued for a couple of reasons (and we will argue it).  First, by the Big Show winning the championship it ends the storyline by showing that the Big Show can have his WrestleMania moment.  Secondly (and most important), Cody can now move to a higher position on the card.

Not much to really note in this match other than Kelly Kelly did most of the ring work as Menonous looked to be favouring her ribs from the very beginning of the match.  (An injury from "Dancing with the Stars")  While Beth Phoenix and Eve worked well with Kelly Kelly, this match seemed very out of place on the card and the fans in attendance did not connect with it as well as some of the other matches on the card.

Notes:  Beth Phoenix and Eve came out to Eve's theme music.  Maria Menonous had bumped into Eve during the match and had makeup smeared on the seat of her pants.

Match #5 - The End of an Era:  Triple H vs the Undertaker inside Hell in a Cell.  Special guest referee Shawn Michaels.

This match received a LOUD ovation when announced and introduced Jim Ross as the special guest commentator for this match.  Shawn Michaels entered as the referee to a nice ovation, but the two combatants in this match both had two of the biggest ovations of the night.  Triple H came out first through a unique "King of Kings" prop entrance and then the Undertaker came out to the rather ominous blue fog and fire display.  Once in the ring, the Undertaker finally removed his hood and shocked the crowd to reveal his new mohawk hairstyle.  In a match that exemplified what a "grudge" match can really be, both Triple H and the Undertaker put everything on the line that left the crowd speechless.  After many near falls, chair shots, sledge hammer shots, referee bumps, and all out emotion, the Undertaker reigned supreme and extended the "Streak" to 20-0.

Notes:  Upon taking his hood off, a rather loud gunshot sound went off for the Undertaker that added to the effect.  Shawn Michaels was heavily involved in the match.  He was first put into "Hells Gate" by the Undertaker which led to referee Charles Robinson taking over for a brief spell.  Robinson's involvement was short lived as he was choke slammed by the Undertaker.  After Michaels came back into the match, he interjected himself by giving the Undertaker Sweet Chin Music which allowed Triple H to use the Pedigree on the "Deadman".  This scene was amazing as the Undertaker kicked out at the two count, shocking the crowd.  Shawn was also later hit by Triple H and taken out briefly again.  The match continued to build as both men exhausted their punishment on each other.  Eventually Triple H (barely able to walk) refused to surrender the match and gave the "Suck It" sign to the Undertaker and received a Tombstone pile driver for his troubles.  After the match ended, all three match hugged in the centre of the ring and up the ramp to a loud and extended standing ovation.

This match followed the Hell in a Cell bout and it really showed as the deflated crowd was unable to really invest in the match.  Even with talented performers such as Kofi Kingston and Dolph Ziggler, the rest of competitors really couldn't capture the crowd in this one.  The match ended when Zack Ryder attempted to finish the Miz with a Zack Attack but instead was kicked in the groin by Eve, allowing the Miz to deliver a Skull Crushing Final.  In the end, Team Johnny won and now it's the Johnny show all week instead of just Mondays.

Notes:  Each team had a Bella Twin for the individual introductions.  Both teams also came out to their General Managers theme music.

The crowd was still reeling from the Hell in a Cell at this point, but that did not stop Jericho and Punk as they put on a  classic WrestleMania match filled with intrigue, intricate moves, and sensational counters.  The match began slow with Jericho working on Punk's back and targeting it as the match went along.  Punk and Jericho continually used mat psychology to tell a story that very few could tell today.  Jericho eventually used the Walls of Jericho and continued to pull him to away from the ropes and the centre of the ring to really put the crowd in a frenzy.  Punk continued to counter the Walls of Jericho but keep finding himself back in that predicament.  (Including being put into the hold from a top rope counter)  After all the layers of heat had been built, Punk reversed the ground base game that Jericho used for this match and made him submit to the Anaconda Vise.

Notes:  Both Jericho and Punk had unique fireworks entrances..  This was every bit the show stealer that many fans thought it would be.  Jericho and Punk built this match from the ground up and a worn out arena on their feet by the end of it.   This match may stand the test of time.

Before the main event began, Brodus Clay came out and danced on stage.  He then pulled out a cell phone and "Call his Momma", which saw dancers come out dressed as elderly women dance with Brodus, Cameron, and Maxine.  The crowd popped HUGE for Brodus during this segment.

The anticipation for this match was incredible.  Machine Gun Kelly performed before Cena made his entrance to his official entrance music.  Although there were many Cena fans in attendance, they were predominately drowned out as The Rock was cheered constantly even before he made his entrance.  Flo-Rida had then performed on stage before The Rock came out to the capacity crowd.  No one had a louder pop from the crowd during WrestleMania than The Rock.  Classically, a stare down ensued in the ring between Cena and The Rock.  Although the match itself was not a technical classic, both competitors put everything on the line with brawling and power reversals.  After a couple of teases with both the Five Knuckle Shuffle and the People's Elbow, the crowd was whipped into an absolute frenzy when both men continued to tease their finishers.  The end of the match saw The Rock go to the top rope for a cross body block, only to be reversed into a firemans carry for Cena.  Cena then went for the Attitude Adjustment, but was then reversed into a Rock Bottom.  After The Rock hit his finisher, he pinned Cena for the three count and the Sun Life Stadium exploded like never before.

Correction:  After reviewing the finish, it occurred during Cena's attempt at performing the People's Elbow.  My view was becoming obstructed at this point.  The push off to the Rock Bottom was the sequence before.  Thanks to Loose Cannon for the shout out.
Notes:  Machine Gun Kelly joined in on the verbal shots before the match began by stating that The Rock has "One of the Biggest Egos of all time."  During the match, the crowd went ballistic for every look, taunt, and move that both men did.  Cena was booed ferociously at times by the crowd and many of his fans were drown out by The Rock's supporters.  Even after the show ended, many fans chanted "Rocky" and "Cena Sucks" while walking out of the arena.
Posted by MattPJournalist at 7:08 PM